Home » Do You Need to Boil Sausage Before Frying?

Did you notice that in some recipes is recommended to boil the sausages before frying and in others don’t? What is the difference? How to know when you should consider boiling the sausages and when you can cook them directly from the package?

Even if it may seem to you that cooking sausages is very easy, there are some points you should take into consideration when you want to prepare some delicious and perfectly cooked sausages.

It is sometimes called a dish of bachelors. Nothing can be simpler than buying sausages in a local shop or a department store and making them ready.

Nevertheless, I noticed that many are wondering if they need to boil sausages before frying.

As many things can influence the answer, let’s dive in.

If you’re looking for a short answer then you can boil the sausages if they come raw and you can omit the boiling part if your package with sausages is already pre-cooked.

In This Post: show
1 Why Do You Need to Boil Them?
2 Boiling or Frying: What Comes First?
3 How to Boil Sausages?
4 How to Fry Boiled Sausages?
5 What Should Be Taken Into Account While Frying Sausages?
6 Why Are the Sausages Dry?
7 Is It Possible to Fry Sausages Without Oil?
8 Can You Cook Only With Oil?
9 Bottom Line

Why Do You Need to Boil Them?

Boiling is a necessary thing when you are going to cook raw sausages. Especially, when the sausages were left for 2-3 hours on the table at room temperature. As there is a high risk that bacteria will start growing, it will be better to boil them to make sure that you kill all the bacteria in them.

Boiling is just one of the ways to kill those potential bacteria from the raw sausages and to make sure that the sausages will be perfectly cooked after frying.

By the influence of the high-temperature difference, the meat becomes safe to eat. The same situation is with the freezing part.

Meat is also influenced by low temperature and bacteria are simply dying. That is the explanation why you need to boil sausages.

Boiling or Frying: What Comes First?

When you bought raw sausages, you need to prepare them for frying. Of course, you can simply place them on the frying pan and roast them until they become brown. Using this method of cooking can become a bit tricky.

They can become brown, but inside they may remain raw in some thicker places. It is hard to find the right balance because you can burn the dish. Besides, eating raw meat is not good for any person. It can be contaminated with bacteria.

To avoid this situation, it is recommended to boil the sausages. As the sausages will become boiled and they will be evenly cooked, when you decide to fry them, you shouldn’t worry about their level of cooking as the interior of them will be already cooked. Just form the level of browning crust that you prefer on the outside.

How to Boil Sausages?

Add some salt into the water and wait until it boils. (Some cooks state that salt can speed up the process of boiling). When the water is ready, put sausages in it. Boil them for 10-15 minutes. No need to boil them more, because they can become watery inside.

When they become gray, it is time to take them out. Place them on the plate and let extra water flow. Then you can get down to fry them or wait until they cool down, and you can freeze.

After that, you can keep them for a few extra months in the freezer without wondering about the potential bacteria on them.

How to Fry Boiled Sausages?

We are speaking about frying already cooked or boiled sausages. The advantage of such sausages is that they are already influenced by high temperatures.

Take a suitable frying pan. It is highly recommended to use a non-stick frying pan. You can use either oil or butter. When you use butter, sausages can become browner and crispier. Nevertheless, they are becoming fatter.

After cooking, you can take the sausages from the frying pan and leave them for a few minutes on a plate that is covered with a few paper napkins.

Quick Note: Take into consideration that our sausages were already boiled or precooked, so that means that you will need to fry them for a shorter time. You will need just to get the sausages a nice brown crust.

Pro Tip: I often see that somebody is trying to pierce the sausages during frying. They are making these actions with the idea to hurry up the process. But in the end, you will get some dried sausages as all the meat juice will leak outside of them and you will leave the sausage juice in the frying pan.

How to Fry Raw Sausages?

When you decide to cook raw sausages, you need to do the same steps. The only difference is the time of frying. It will take about 15-20 minutes longer.

Don’t forget to rotate them and cook them on slow heat in order not to burn them. Also, make sure to use a meat thermometer and check their inner temperature to make sure that they are safe to eat. Especially, if you’re cooking pork sausages.

When they are ready, you can take them out of the frying pan and cover them either with foil or paper. It will concentrate the smell and taste inside. Leave them for 10-15 minutes and serve at the table.

What Should Be Taken Into Account While Frying Sausages?

Sausages are rather tasty, but frankly speaking, the line between some nice and juicy sausages to some dried overcooked sausages is very short. Because of that, it is highly recommended to be with an eye on them. Don’t blindly follow the cooking time from the recipes as it may differ from the type of meat you are using, their fat level, and the sausage’s initial temperature.

To make sure that you cook delicious sausages every time, consider using a cooking thermometer to check the temperature of the sausage.

Why Are the Sausages Dry?

One of the tricky parts may be that you will cook the sausages until the safe temperature but when you will try to eat them, you may notice that they are dry. Does that mean that you should eat them below their inner safe temperature?

The secret behind some perfectly fried sausages is that you should cook them a little below the final temperature and leave them to rest for a few minutes. During that time, the inner temperature of the sausages will increase a little until they will reach the perfect, safe temperature plus the meat juice will distribute more evenly on the inside and the sausages will be juicier in the end.

Read further to find the right temperature that we should opt for while we are frying the sausages.

If you cook some ground pork or beef sausages (find if you can cook the mice directly from frozen) you should stop cooking the sausages when they reach 155°F/68°C. After the sausages have rest, their inner temperature will increase to 160°F/71°C.

In case you’re frying some sausages made from poultry meat, just make sure that you will stop frying them at 160°F/71°C because, after the rest time, the inner temperature will increase to 165°F/74°C.

Quick Note: Keep in mind these cooking temperatures are for the sausages that are cooked from raw ground meat. If you boiled them previously, the inside of the sausages are already pre-cooked and they are safe to eat. Just pay attention to the level of crispiness you want to get on the outside of the sausages.

Is It Possible to Fry Sausages Without Oil?

Yes, it is possible. You need to do one trick to make them ready. As usual, take a non-stick frying pan. Heat it and place sausages on the pan.

Pierce the sausages and add some water near them to the frying pan. When the water evaporates, you can go on cooking sausages with the fat out of them. In that way, you will use the fat that was eliminated from the sausages instead of using oil.

The main thing here is to use the right amount of water to cook sausages.

Can You Cook Only With Oil?

There are no restrictions here. You can use any kind of vegetable oil. The most widespread types are traditional sunflower oil and olive oil.

Some people like doing experiments and prefer cooking on avocado or even coconut oil. You can choose whatever you like. Butter is not forbidden either. Just keep in mind that different types of oil may give a slightly specific taste of the oil to your fried sausages.

I hope that I have answered all your questions about why and when you should boil the sausages before you will start frying them. If you have still some more unanswered questions, feel free to drop a comment below. 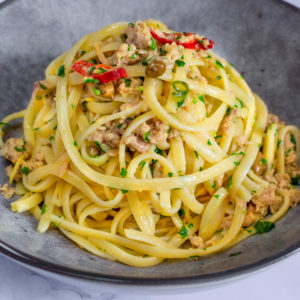 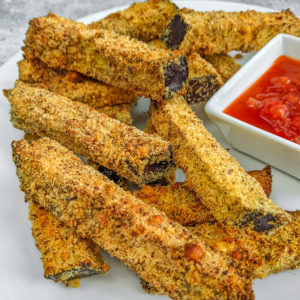